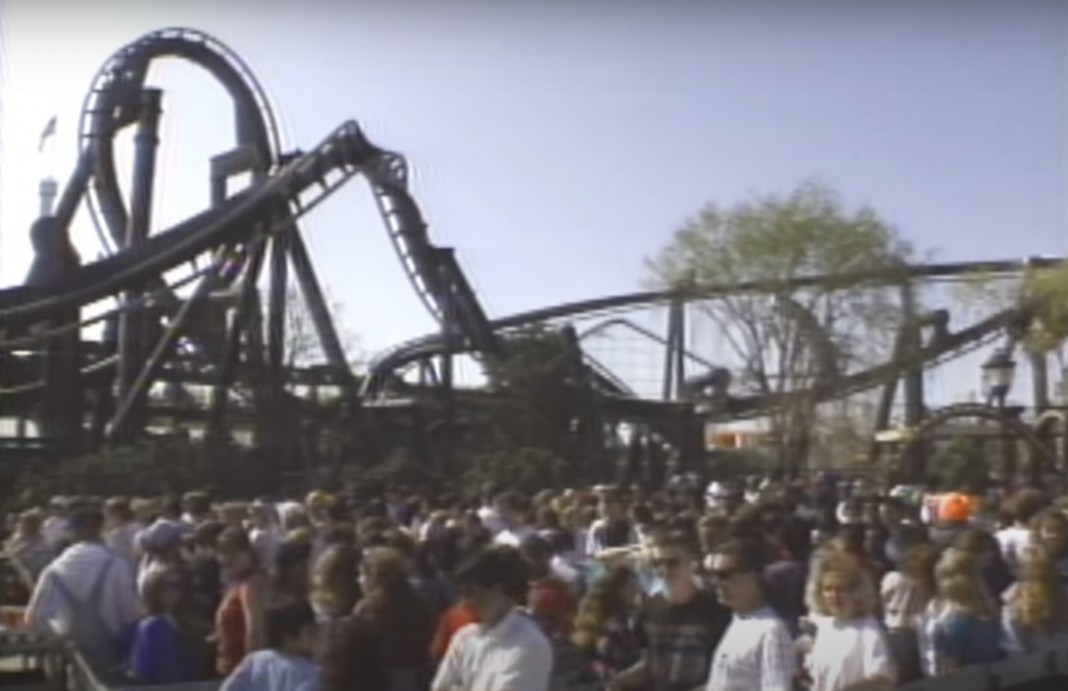 At the time, this was the only inverted roller coaster in the world. The story goes that Great America’s General Manager Jim Wintrode came up with the idea and the great designers at B&M made it happen. All I knew the first time I saw it was how CRAZY it looked. And how it ROARED as it flew by.

I wasn’t there on opening day. That whole summer, the line seemed to go on forever. I had never seen anything like it. It snaked around the East River Crawler and even further than that. I remember waiting for almost three hours the first time we rode it. And I remember not minding at all.

That’s most because of the tremendous amount of detail that went into the theming of Batman: The Ride. When you walk into the queue, you are stepping into Gotham City Park. Speakers disguised as rocks play the peaceful sounds of birds. As you moved through the park, things got darker. It felt gritty. There were discarded hunks of metal. A police car was destroyed. The sound got creepier. After you went through that area, you entered a storm drain with an odd, musty smell and this pulsing sound of a large fan. You climb a set of stairs to get to the station that feels way too close for comfort. I was 11 years old and freaked out!

By the time you left that tight space, you were inside the Batcave, and it was glorious. Train after train of the coaster came in with the clicking sound of all of the riders playing with their safety belts. There is so much detail in that station and all of it adds even more intensity to the ride. You aren’t in Gurnee, Illinois anymore – you are in Gotham City in the elusive Batcave. To this day, it remains one of my favorite themed attractions.

Then there was the actual ride. To me, Batman is a mandatory front seat ride. I remember the feeling of getting on it for the first time, feeling my feet dangling from a coaster car. It was exhilarating. You’re in the station, the floor drops, and people were yelling WHOA! This was a new experience.

Then, the rest of the ride. THE FIRST DROP.

This remains one of those great coaster moments. You twist down, gathering speed before that first inversion, a loop that whips you back into your seat. Then….THE ROLL.

I love this roll. You’re floating in your seat, and if you pay close attention, you can look down at the end and see that smashed cop car that was in the queue. Just brilliant design here! After all of that you enter that absolute bat-crazy portion of this ride.

I have no clue how they crammed all of these maneuvers into that tight space. And I swear, this ride gets faster every year. Either that or I’m getting older. This moment here, this insane inversion nearly blacks me out every time.

The roll comes out of nowhere! This whole section of the ride is like a blur to me. I’ve been on it so many times, I should know what’s coming next. But for some reason it surprises me every time.

And of course, who can forget the slam-on-the-brake run at the end that throws every rider into their harnesses? You still look at the person next to you after that happens like “what the heck was that?!”, don’t you? I do! Then I kick my feet wildly to empty out all of the adrenaline pumping through my body, and play with that harness seatbelt flap until we arrive back into the station. Just like I’m that 11 year old kid, again. Although this time I’m a lot dizzier.

Today, there are many more inverted B&M coasters all over the world. People from outside of Chicago might come to Great America and walk right past Batman, thinking “I’ve seen that before.” I’m so thankful my home park got this ride first, that I had that moment to look up at something the world had never seen before.

Even though it gets harder and harder to ride it multiple times the older I get, Batman still holds a special place in my heart. Today it turns 28, nearing three decades of craziness. Yet it still feels like yesterday when I took that first ride I will never forget.

Do you have a Batman: The Ride memory?

Did you get a chance to ride BATMAN BACKWARDS at Six Flags Great America? I did a few years ago! Here’s some video of that…

Here is some classic video from the day the ride opened..

And here is the latest and greatest official POV. If you haven’t been to Great America in a long time, the ride is yellow now…