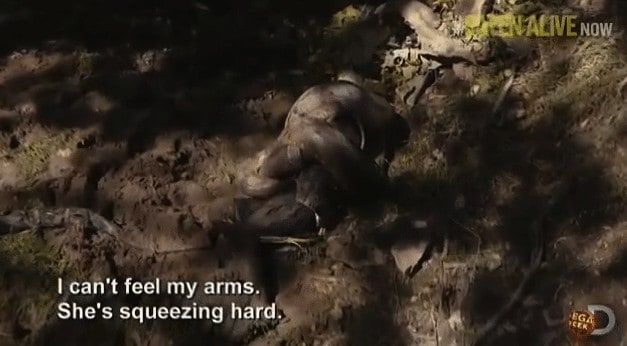 Like other death-defying TV stunts, the reaction to the EATEN ALIVE Discovery Channel special is better than the actual show

Naturalist Paul Rosolie captivated the nation, or at least a small portion of it, by volunteering to be eaten by a giant anaconda snake as part of the EATEN ALIVE Discovery Channel special. We’re talking a 250 pound, GIANT snake. Sounds great, right? Who wouldn’t want to see a grown man get devoured by a reptile? Here is the promo…

But the show spent almost two hours getting to the big moment. Once Paul was all suited-up in his snake-proof attire, he encountered the great beast. It bit down on his arm, wrapped around his body, eventually moved its mouth to his head….and Paul tapped out.

Viewers felt ripped off. This man was still alive, sure, but he was in no way “eaten.” At least Geraldo actually made it INSIDE Al Capone’s vault.

Here are some of the funniest tweets posted during last night’s show….

Next time I watch something called #EatenAlive, somebody better get eaten alive.

#EatenAlive is some of the dumbest stuff I’ve ever seen and I’ve seen Home Alone 3 AND 4 — Sean Doolittle (@whatwouldDOOdo) December 8, 2014

So what everyone is telling me is that he didn’t have buns, hon? #EatenAlive

.@Discovery I’ve never watched your show Naked and Afraid but after watching #EatenAlive I assume everyone is clothed and calm.

Next on Discovery…”Finding the Tooth Fairy” where I spend two hours looking for the Tooth Fairy, give up and get a burrito. #EatenAlive — Matt Lindner (@mattlindner) December 8, 2014

U couldn’t take a broken arm for science? Seriously dude, what did u think it would feel like? A shiatsu massage? GO GET EATEN #EatenAlive