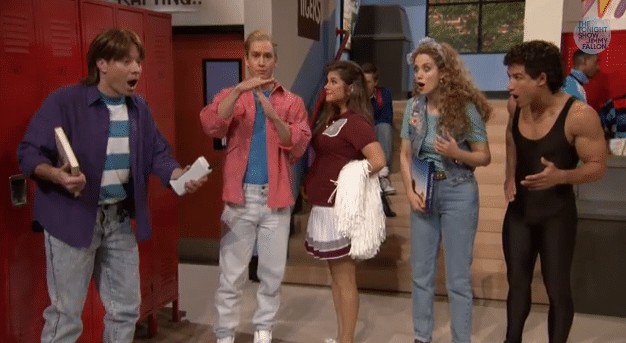 It’s been no secret – Jimmy Fallon has an obsession with Saved By The Bell, just like the rest of us who grew up with the show.

“The Tonight Show” is in Los Angeles this week, and one night after he recreated the Fresh Prince Of Bell Air open, Fallon got most of the cast members of Saved By The Bell back together for a roughly 10 minute bit. They include Mark-Paul Gosselaar as Zack Morris, Mario Lopez as A.C. Slater, Elizabeth Berkley as Jessie Spano, Tiffani Thiessen as Kelly Kapowski and Richard Hastings as Mr. Belding. Noticeably absent – Lark Voorhies as Lisa Turtle and Dustin Diamond as Screech.

Check out the video….