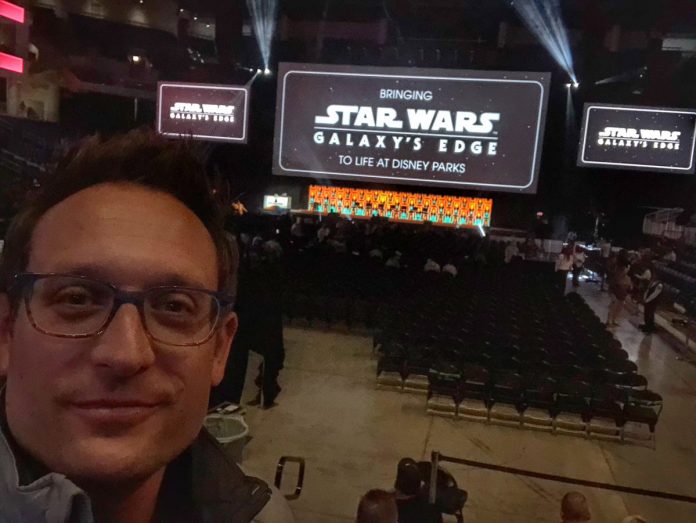 Star Wars Celebration is in full effect in Chicago! Yesterday we got our first look at Episode IX – The Rise of Skywalker. Today brings Disney Parks to the stage for the Star Wars Galaxy’s Edge panel bringing many more details about what’s coming to Disneyland and Disney World this year!

I was in the Wintrust Arena to get all the details from the panel. We saw a lot of interesting things, and there are still plenty of questions to discuss. Here are some of the updates from the day…

First up, Imagineer Scott Trowbridge took the stage to announce the Star Wars / Disney Parks partnership with FIRST Robotics. They’re all about young people getting involved in robotics. There’s a contest and they’re giving a way a trip to check out Galaxy’s Edge in person.

Be a #ForceForChange and spread awareness of @FIRSTweets. Retweet this video w/ the hashtag #StarWarsFFCSweepstakes from 4/13-4/22 to enter for a chance to win a vacation to Star Wars: #GalaxysEdge at @Disneyland! No Purch Nec. Odds/Rules: https://t.co/KvRSly6Qtk pic.twitter.com/aJ1r6mljOi

Josh Gad was the big surprise host for this panel. After starting with a introductory video, he invited our panel onto the stage. Trowbridge showed off more renderings of what we’ll find in Galaxy’s Edge.

They really stressed the detail they’ve put into the world of the planet Batuu. There will be food and drink, including this spot where you can get spit-roasted meat that looks like it was cooked with an old pod-racing engine.

Next it was a brief talk about the upcoming Rise of the Resistance attraction! I was looking forward to hearing a lot more about this….but we didn’t hear that much. They showed this teaser again.

One of the neat things they mentioned – that trailer was shot inside of the attraction. Again, you can see the detail that has gone into it. The Rise of the Resistance ride vehicle was on display at Celebration as well. Here’s a shot of me sitting in it looking way too excited. 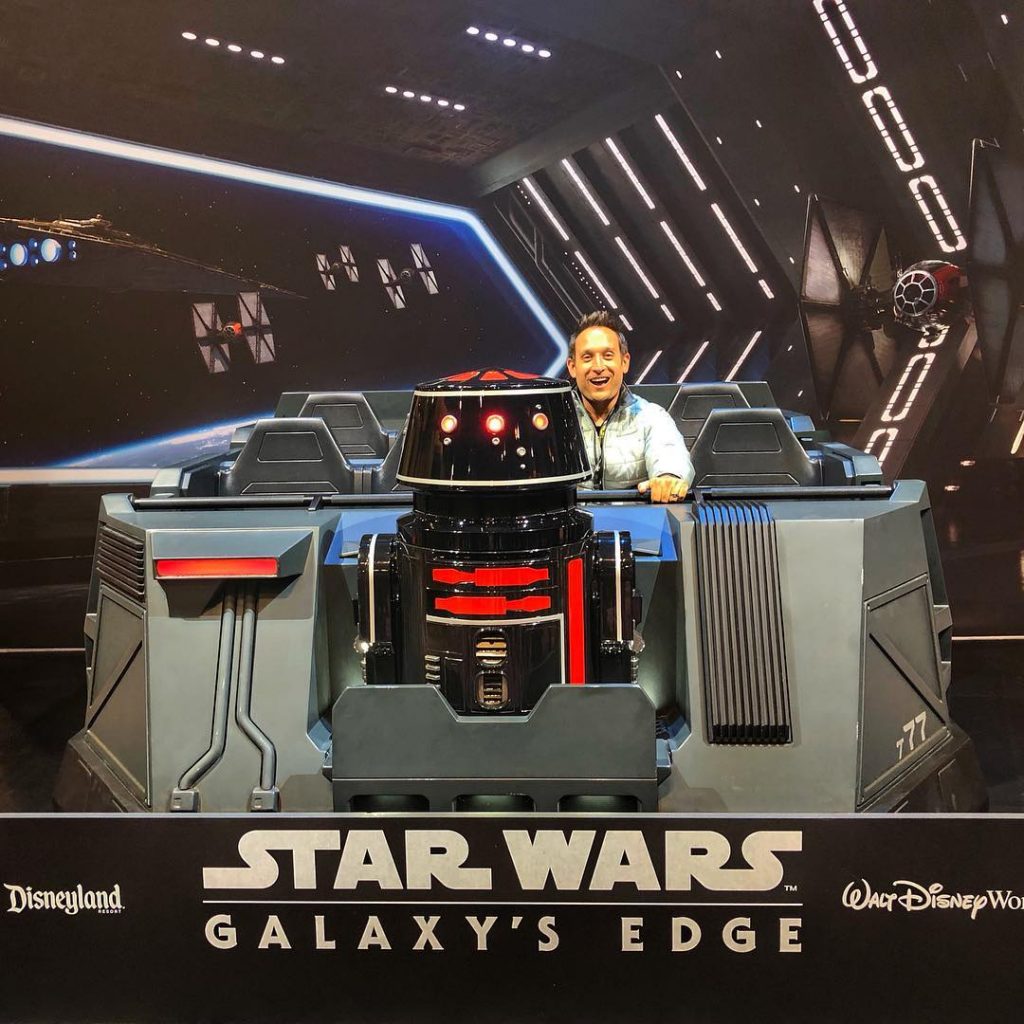 Rumor has it this will be a track-less vehicle system that takes you through a building that uses turntables and elevators to make you feel like you’re moving through the galaxy. Oh, and panel host Josh Gad kind of asked about the rumors that the ride will be crazy long. They didn’t deny it – but they also didn’t come out and confirm the length either.

They spent a lot of time stressing the work that has gone into the new storyline for Galaxy’s Edge and all of the detail of the characters. Here are a few examples of that.

Now talking about all of the stories and characters you will encounter in #GalaxysEdge. Here are some of them… pic.twitter.com/KlzLWTj2Yu

“Authenticity” is the most important word for the design team when developing these characters and their worlds. #GalaxysEdge pic.twitter.com/c6Nn1S1tR0

You’ll also be able to create your own hand-built lightsaber.

You’ll be able to design and build your own lightsaber at #GalaxysEdge. This sounds cool. And expensive. 😂😂 pic.twitter.com/chCh8pUqz6

We had a big product announcement. Disney is partnering with Coca-Cola who will sell these interesting looking bottles at Galaxy’s Edge.

Coming soon to a galaxy near you: specially designed @CocaColaCo bottles will be available exclusively at @StarWars: #GalaxysEdge beginning May 31 @Disneyland and August 29 @WaltDisneyWorld! https://t.co/tGGrNbpnCg pic.twitter.com/PARP1JYyl2

THE CANTINA! How many times have you watched the original Star Wars and wished you could visit that place? Well, they had some announcements about what they’re created – including some brand new CANTINA MUSIC!

And DJ Rex from Star Tours is back, who will be voiced by Paul Reubens. Rex has his own music as well.

DJ Rex from STAR TOURS will be a character in the new Cantina. #GalaxysEdge pic.twitter.com/4i9COknz1K

There were some neat details about the new Millennium Falcon: Smuggler’s Run ride. First, this thing is going to be waaaaay interactive. The way they explained it, you will have the ability to actually fly the ride. That means you can crash it into space junk, or you can be the greatest pilot in the world and come out clean.

But what’s really cool? There is a hallway you walk out of after the ride. That hallway will change based on how much damage you did to the ship. Not quite sure what that will look like, but it sounds really neat. Again, the detail they are putting into this entire land sounds crazy.

More Millennium Falcon. This is the hallway you walk through after the ride. If you damage the ship during your flight, the ship will LOOK damaged after the ride. Incredible. #GalaxysEdge pic.twitter.com/u2TrfQUM5i

They also showed off some of this animatronic work. Check out this Hondo Ohnaka who will greet you at one point.

Some classic characters like Yoda will be returning – not sure in what form –  and yes, Frank Oz is doing the voice work.

VIDEO: #GalaxysEdge will have a gaming component on your smartphone, letting you interact with the world around you. pic.twitter.com/BtZlBr89OI

And finally, they showed off some brand new footage from the actual site. This was really great to see. Renderings only go so far, but to see this level of detail in its real-life form? Wow. This is truly going to be an incredible experience for any Star Wars fan.

🚨 VIDEO: NEW FOOTAGE FROM INSIDE #GalaxysEdge 🚨 @JoshGad says it is beyond a @StarWars fan’s wildest dreams. pic.twitter.com/E0zf5biDxt

Star Wars: Galaxy’s Edge opens at Disneyland on May 31st and at Disney World’s Hollywood Studios on August 19th. The big question – when are YOU going?!