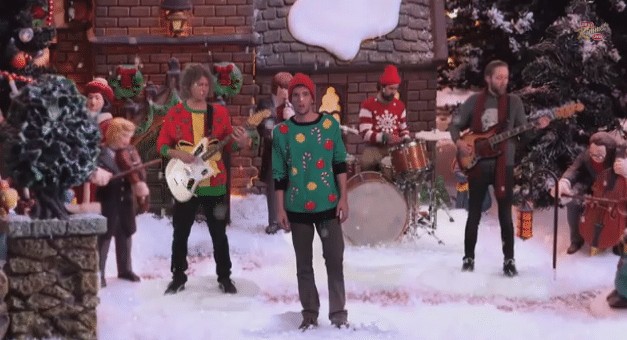 The holiday just isn’t right without a video for The Killers new Christmas song. Every year the band puts together a song centered around the holiday for charity, and this year, they got some help from Jimmy Kimmel. More from Kimmel’s YouTube channel….

Every year since 2006, The Killers write and record a special Christmas song for a very good charity – the RED campaign. They usually collaborate on these. Some of the artists they’ve worked with include the band Dawes, Neil Tennant and Elton John. Needless to say, Jimmy was flattered that they asked him to be a part of it this year.

This year’s song is called “Joel The Lump Of Coal,” telling the story of a poor little piece of coal that’s trying to find his place in the Christmas season. Brandon Flowers and the rest of the band appeared in a bit on “Jimmy Kimmel Live” to premiere the new song. It’s fun to see what these guys come up with every year.

You can watch the video below……