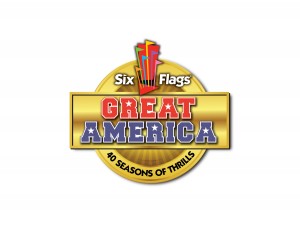 It’s going to be Throwback Thursday all year at Six Flags Great America.

Today, SFGA announced their plans for 2015 – a yearly celebration that will look back on their four decades in business. The park opened in 1976 as Marriott’s Great America in Gurnee, Illinois. Next summer will be their 40th season, and they’ll be celebrating by brining back some of the classic kids rides. They include the Tots Livery Surrey Carriages, the Red Baron airplanes and the Lady Bugs.I remember the airplanes but I’m blanking on the others.

They also told me there would be improvements throughout the park, including a restoration of Hometown Square. Look for the gazebo to return and things to get back to their pre-Ignite look. There will also be weekly celebrations of various attractions throughout the park. For example, if it’s “Raging Bull Week,” the park will have a 1999 feel to it – the year the coaster opened. You can expect to hear music from that year and other touches throughout the park, and possibly even double rides on that particular coaster. Could be a lot of fun.

Here’s the promo video for the 40 seasons celebration….