Winter is coming. Soon enough we will be looking at our lakes and wondering when it’s safe to venture out for fishing or ice skating.

But just how thick does ice have to be to do this stuff?

The Alaska Department of Natural Resources and Fish and Game has some answers for you. For example, they say ice should be at least 4″ thick for ice skating or fishing. It takes 8-12″ of ice to drive a car onto a lake.

And your Woolly Mammoth will require 25-52″ of ice to avoid him plunging into frigid waters. 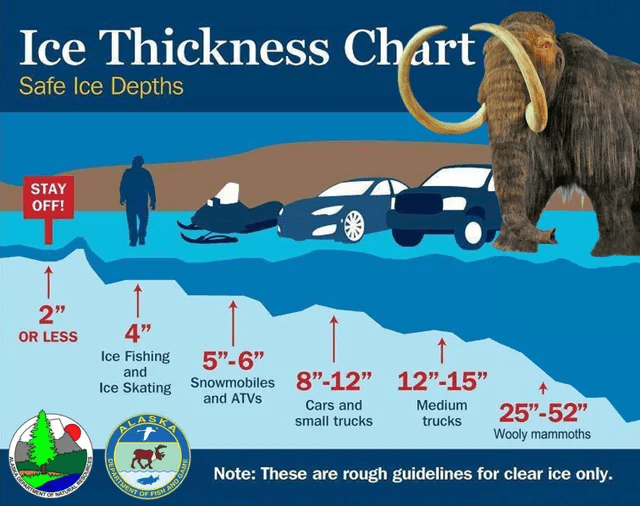 Now, it’s been a while since I or anyone else has seen a Wooly Mammoth around. I had to look it up. Turns out it’s been 10,000 years since they walked the Earth. They weighed about six tons or 13,000 pounds. LiveScience has more about how Wooly Mammoths survived in such brutal conditions…

“The lumbering, shaggy-haired woolly mammoth once thrived in the frigid Arctic plains despite having originally migrated from a more tropical climate. A new study has found tiny genetic mutations that changed the way oxygen was delivered by its blood could be responsible for its tolerance to the cold climate.

The woolly mammoth was an elephantid species and most closely related to today’s Asian elephants. It went extinct around 10,000 years ago.  But because the mammoth lived in the Arctic, many remains of the species have been found preserved in the permafrost.”

So if you happen to find a Woolly Mammoth, let them know that it will take at least 25″ of ice for them to venture out onto a frozen waterway.

Be safe out there, people. And mammoths.