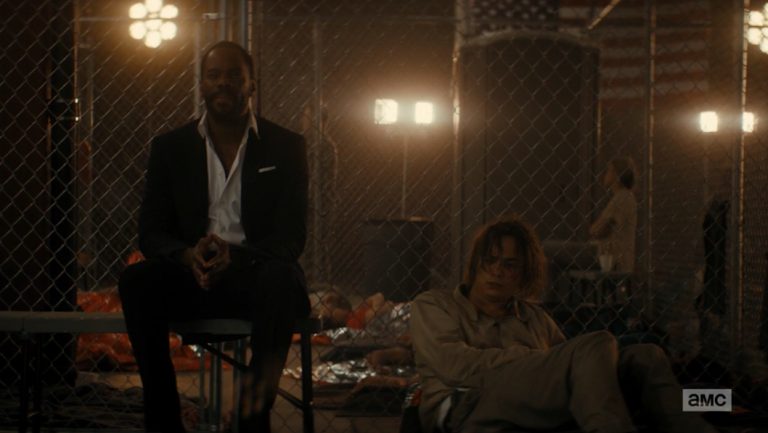 I love how this show is moving so quickly through time. At least, that’s how it feels. A few episodes ago there were a few junkies seemingly turning into cannibals, now there is a full military takeover of Los Angeles. It makes you wonder if things could really escalate that quickly – and do our real-life emergency service agencies have protocols like this in place we don’t know about? I’d like to think the real National Guard wouldn’t be so shady. I’m sure it would be a nice orderly process where everybody tells the truth and looks out for one another.

Back to the show. Unfortunately my 2am morning show wakeup call awaits, so I have to be quick.

Nick isn’t taken to some jolly hospital where he’s getting the treatment he needs. Both he and Doug are in a fenced-in pen, some creepy fellow inmate talking to Doug about his wife’s body and how he needs to get it together. What are they doing here? It appears they are monitoring everybody to see if they are sick, but what’s with the well-dressed guy and all of his deep questions?

Back at the ranch, our families are figuring out how to get their loved-ones back from the “hospital” they were carried away to. That involves holding Ofelia’s military boyfriend hostage and doing what it takes to get information out of him.

There were a few lines drawn in this episode. For one, there are people who will want to rise up and demand answers. And then there will be people who believe following government protocol and obeying the rules will keep things together.

“Do you want your boy back?”

Five episodes in, and we are already debating the merits of torture.

I loved the sequence with Travis being dragged, or driven, into the streets by the military. These guys have spent time (one soldier says his group hasn’t slept for 50 hours) on the other side of the fence. The city is a wasteland. Yet the people inside that fence, including “Mr. Mayor,” are still living in a world where the infected are people who need help.

There is no help. They are gone.

Cut to the hospital where doctors are quickly disposing of anybody who comes in with anything consisting of a bite mark. The doctors have determined that everybody, no matter how they die, turns after death. The place seems to be spiraling out of control, which leads us right into…

Cobalt – the term that’s been flying around on the military radios all episode. Thankfully (I think?), the torture is a success. We find out that “Cobalt” is the military code word for a massive evacuation and humane termination of all non-military personnel. Goodnight, good luck, soldiers out. And it’s happening at 9am tomorrow.

I hope you enjoyed my Fear The Walking Dead Episode 5 Recap. What did you think of the episode?