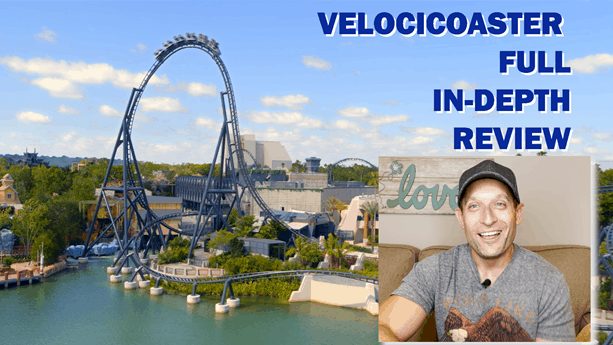 Our Universal trip has come to a close and some of you have asked if I was going to ride the new VelociCoaster. Well, we rode it. And I have some thoughts.

In fact, I have 18 MINUTES worth of thoughts.

I put together a video with my full review and analysis of what could be my new #1 roller coaster. Yes, VelociCoaster is THAT good.

By now, you’ve heard the reviews from the enthusiasts, from the theme park correspondents and the many vloggers and bloggers – just like I have. They all said the ride is great. Some said it’s a top 10 attraction period …. an absolute stunner. My expectations and excitement level were very high for this.

VelociCoaster exceeded them. Pretty much blew them away.

The ride is thrilling from start to finish. From the slow buildup right out of the station as the raptor cages are rumbling all around you, to the zigging and zagging around before you hit that second launch.

That second launch is incredible! During all of the construction and ride rumors, I thought the coaster would be stopping there for some kind of show element. But when we found out that it would just keep going and fire you into the top hat element, I was kind of disappointed. Wouldn’t the rider need some time to breathe? Would it feel too rushed to just keep going? Aren’t they missing an opportunity there?

It turns out the top hat itself – the climb to 155 feet in the air – is the perfect break in the ride! You spend the first half zipping around so many tight corners and then suddenly you are launched nearly straight up and have a few seconds to crest that hill and admire the view. It’s the perfect break.

Then the ride gets FASTER.

But here’s the thing … it’s never “crazy.” All of the elements in the second half are the stars of the show and they’re all given good time to breathe. I found myself yelling WHOA! a lot on the ride. Like “WHOA I’ve never felt that quite like that before.” That final barrel roll that you hit at 50mph is one of the best finishes on a ride ever. If not THE best. And it’s over the water. Just spectacular.

Many of you have asked me about the restraints on the ride. There are no over-the-shoulder harnesses on this coaster – and yes, it does go upside down. Other new coasters that go upside down only have lap restraints. The Rocky Mountain Construction coasters like Goliath and Steel Vengeance are a few good examples. However, those rides also feature seat belts and some shin restraints. VelociCoaster is pretty much all one lap bar. I never felt unsafe or unsecure on the ride and I love the free feeling it gives you.

Bottom line – this is one of my favorite roller coasters I have ever been on. I’ve still only been on it ONE time, so it’s hard to say it’s at the top of my list, but it’s easily in the top three.

I would love to hear what you think about the ride. You can let me know on my social media accounts:

Congratulations to the entire team at Universal Orlando for creating some a unique and unforgettable attraction. I can’t wait to get back down and ride it again.