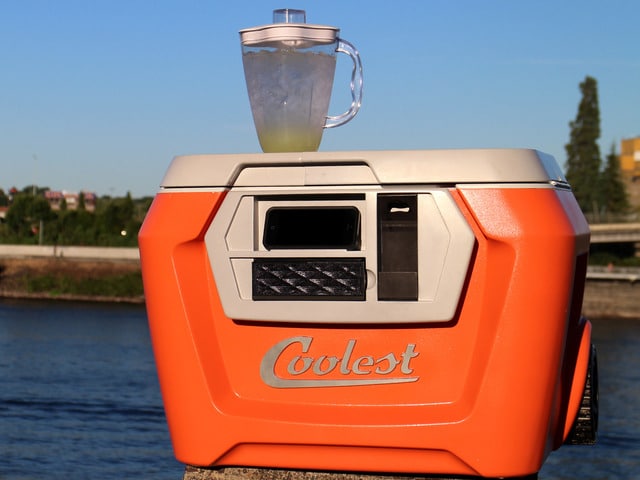 An 18-volt rechargeable blender, a cutting board, a waterproof Bluetooth speaker, a USB charger, a set of plates, an LED lighting system and a bottle opener.

All inside one cooler.

This is the brainchild of Ryan Grepper, the Portland inventor behind “The Coolest.” He set out to raise $50,000 on Kickstarter. So far, he’s raised more than $2.9 million. From OregonLive.com…

This is actually the second time around for the Coolest Cooler. A version launched last winter fell short of its goal. Grepper said he and his supporters learned from the experience.

This cooler has more features, more distinctive design and, of course, it’s launching in the heat of the summer, rather than the chill of winter.

This time, when he launched again, he was able to notify the backers of the first Coolest Cooler, who gave it a boost out of the gate.

According to Kicktraq.com, which analyzes crowdfunded projects, Coolest Cooler has a trendline a little north of $20 million. The Pebble e-Watch holds the Kickstarter record of $10.23 million pledged.

You can pre-order a “Coolest” for $185  on the Kickstarter page. They say that’s a $115 savings from what the final retail price will be. They hope to ship them in February 2015. Can’t wait to see how well it works in person!

Check out the video below…