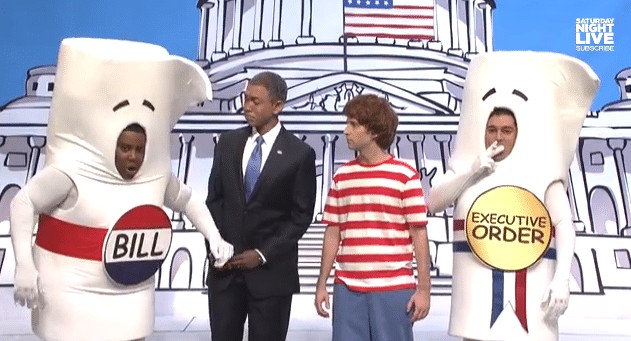 A funny SNL cold open?! I guess it depends on which side of the issue you’re on.

Last weekend’s Saturday Night Live opened with a spoof of Schoolhouse Rock, featuring Jay Pharoah’s President Obama taking a bill and chucking him down the Capitol Hill steps. He’s replaced by a cigarette-smoking Executive Order who tells us how government really works.

The reaction was pretty much what you’d expect. On the left, sites like Think Progress went through a point-by-point synopsis on how the segment was hilarious, but “totally wrong.” And on the other side, I would guess Rand Paul doesn’t post SNL sketches to his Facebook too often, so it appears he was a fan of the bit….

Check out the SNL Schoolhouse Rock parody for yourself below….